Some time ago, I have encountered a programming exercise in which the goal was to implement Luhn algorithm for credit card number validation. At first I implemented the algorithm in Ruby and then decided to implement it in Elixir. Eventually, I like how Elixir version looks like.

The Luhn algorithm is quite straightforward. Description from Wikipedia 1:

The formula verifies a number against its included check digit, which is usually appended to a partial account number to generate the full account number. This number must pass the following test:

My main function of the Luhn algorithm clearly outlines the steps of the algorithm:

The part that made me think hard is doubling of every second digit. It was implemented by converting a string with a credit card number into list of codepoints and converting this list into list of lists of at most 2 elements, doubling every second element in each list and then those lists were flattened into one list:

Function sum_double_numbers/1 converts each number from a list of numbers (eg., ["2", "18"]) into list of codepoints. If this list contains two codepoints, then it sums them, otherwise the codepoint is returned as is.

To search for possible improvements for the code, I have installed a static code analysis tool called credo. After running mix credo in my project I have got 8 refactoring opportunities and 1 code readability issue: 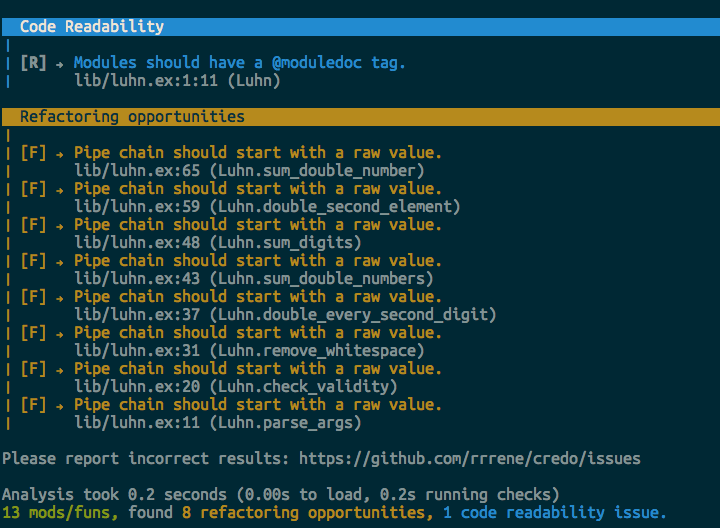 Pipe chain should start with a raw value

This means that I should refactor my pipes to start with a raw value (clearly!). For example, function remove_whitespace/1 will looks like:

Modules should have a @moduledoc tag

Credo suggests me to add @moduledoc tag and write some documentation for Luhn module:

In order to benchmark my code I have used tool Benchfella.

Very simple script has been made to be used with Benchfella:

Comparison of both implementations shows a significant improvement when String.replace/4 is used: 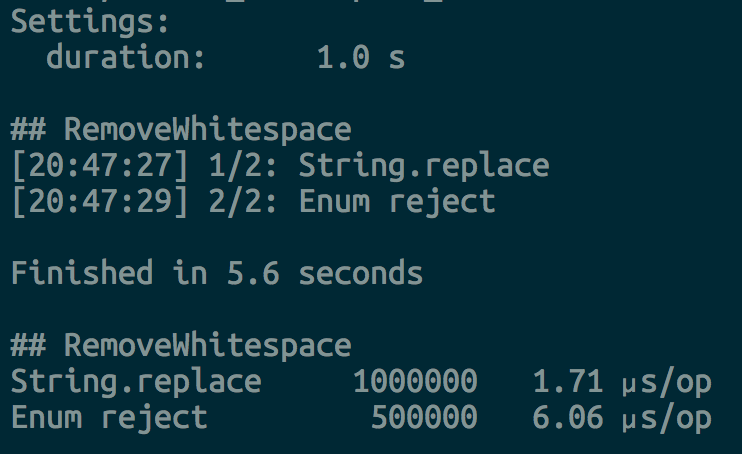 Function double_every_second_digit/1 could be implemented using map with indexes and the card number could be represented as integer:

Again it shows improvement over the version with lists:

As a general suggestion that can be derived from this optimization is that it is beneficial to pass credit card number as an integer instead of a string. By refactoring code to pass around credit card numbers as integers we again see notable improvement in speed:

We implemented Luhn algorithm in Elixir and saw how pipelines outline steps of the algorithm. After coding the initial version we used credo to receive suggestions on style of our code. Lastly, we improved performance of the algorithm by implementing several functions differently and by treating a credit card number as an integer instead of a string. Nice side-effect of this refactoring is that credo does not find any problems with the code.

Latest source code can be found on Gitlab: Luhn algorithm